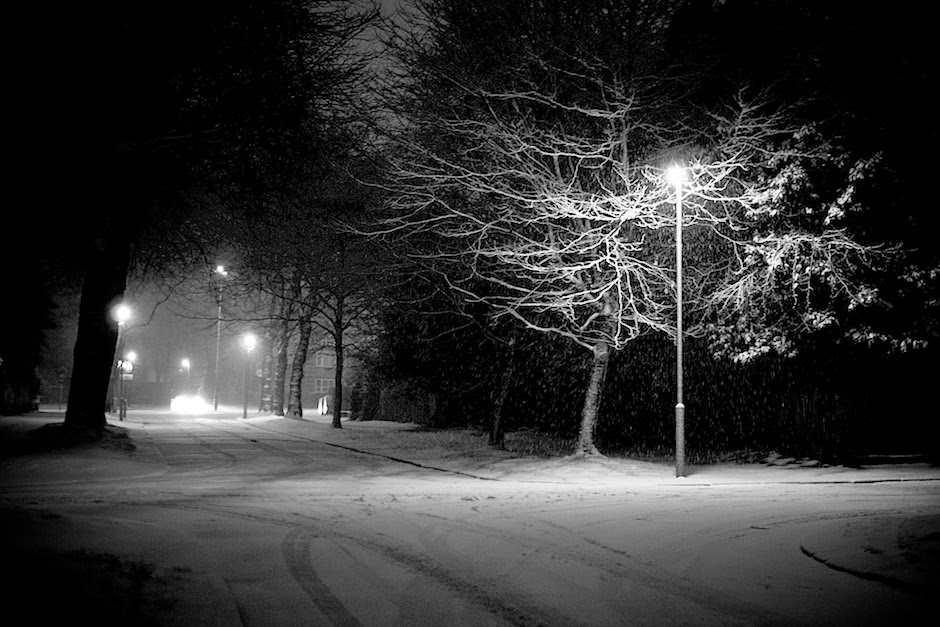 I was sixteen when my father left.

That year there was no Christmas tree, no turkey dinner, no presents.  My mother worked two jobs as a cleaning lady.  I sold hats at the Emporium in downtown Saint Paul.

It was Christmas Eve, 1965. The store was closed.  The streetlights were decorated with the tinsel of the season.  Somewhere a church bell tolled "Silent Night."

I stood alone on the corner and waited for the bus to take me home.

The wind whipped my thin coat and threatened to tear off my hand-knit hat.  My mother had sewn a pair of corduroy pants to pull up under my dress, but I carried them.  It was better to freeze than look ridiculous.

It was a snowless night, bitter and empty.  I shivered against the wind and considered how one year had changed everything.

My parents' marriage was over.  My home and heart were broken.

The divorce did not surprise anyone but me.  My father's fierce anger had exhausted my mother's forbearance years ago.  But he had never gone away before - never abandoned us.

It was because of him there would be no holiday.  I resented him for the destruction of my family.  These were the things I pondered as I lumbered into the freezing-cold bus.

I found a seat next to the bus heater and placed my feet on the perfect spot. Hugging my corduroy pants I cherished the small comfort as the heat blew around my legs.

That is when it happened.

A man - perhaps in his sixties - appeared from somewhere in the back of the bus. He smelled of English Leather and Pepsodent and wore a hat like Frank Sinatra used to wear. A fine Pendleton wool muffler hid half his face and he held a large shopping bag.

"May I?" he asked as he prepared to sit.

I looked away.  I didn't speak to strangers - especially men.

He sat beside me and placed the shopping bag between us. I noticed the bus driver watching him in the mirror.  Everything would be all right, I thought as I closed my eyes and hugged my mother-made pants.

Then - the man touched my arm.

"Excuse me," he said.  "I couldn't help notice you're shivering.  Are you okay?"

He peeked at me from behind his muffler and when his eyes met mine, I saw something I hadn't seen in a long, long time.  It was the gaze of kindness. For a moment, I felt the chill of the bus dissipate.

When he spoke,  I realized he was worried about me; truly worried.  The sensation was foreign.  My father's face never filled with concern for me or anyone else.  Anger, frustration and fear were the foundations of his personality.

Perhaps being a dad burdened some men more than others.  I wondered if this man had kids.

The bus made a gassy sound as it stopped, and he rose to leave.  He held the handrail of the seat before him and looked back at me for the last time.

I said, "thank you," and heard my voice break.

He was in the bus doorway when I realized he left his package.

"Wait" I called, lifting the bag.

He turned, pulled down his scarf to flash a smile.

The bus driver insisted I take the package home - so I did.

The house was dark when I arrived.  My mother was asleep in her living room chair.  At first she didn't believe me when I told her what happened.  But my story was so marvelous that she came to accept it.

We opened the shopping bag and found three packages wrapped with red ribbon and gold paper.

A box of Fanny Farmer white chocolate - a bright red cashmere scarf - and the smallest of the three; a tiny mother-of-pearl music box.

My mother wrapped the scarf around her shoulders and marveled at the large almonds in the white candy.

"Maybe things will work out after all," she said. "Maybe next year will be a better year."

She handed me the music box.  The tune it played was "Have Yourself a Merry Little Christmas."

As the tune circled our cold little house, it occurred to me; there was one kind man left in my world.  If there was one, there might be others.  If there were others, the world was not an ugly place - and the lyrics of the song are true.

"Next year all our troubles will be miles away."

I treasure the tiny box to this day.  It holds a gold ring from  my husband, an old cameo my mother wore, and the memory of my Christmas miracle.