How solitaire made me normal

When I was four-years-old, I was a little  (how shall I put this?) schizophrenic.

I talked to numbers.

They were my friends -  and each had a distinct, particular personality.

For example - number One was an only child, growing up on Summit Avenue.

His father was number  Fourteen,  who didn't believe in God.

Six, if I recall,  was married to Miss Francis from Ding-Dong School.

Ricky Ricardo loved Nine.  He almost married her, but Lucy came along - and ruined everything.

Numbers were my playmates.


I still remember when Five, Seven and I put pennies on the rail-road track near the Dunlap Avenue Short Line.

After the train passed, we knew we couldn't  keep the flattened souvenirs - my mother would have beat the daylights out of us for playing in the ravine.

Instead, we sold them to Eight and Ten; a couple of red heads growing up in an over-crowded duplex on Lincoln Avenue.

How many kids in the house?  Beats me.

I didn't know how to count.

The adults in my family would never call me "crazy."


Even so, they set about to change the way I thought about numbers, television and reality.

Howdy Doody wasn't a real boy,  Crusader Rabbit was not my boyfriend and numbers don't marry and have children.

My folks came at this project from a variety of approaches.

My father asked me to "count" nails as he hammered them into a screen door.

My mother, ironing my dresses,  asked me to fetch Ten hangers from the closet.

I counted the nails for my dad - but Ten thought ironing was silly - and my mother was a little stupid to spend her time doing it.

I told her to get the hangers herself .

Flash cards and the jealousy of Three.


My dad tried to teach me addition.

He bought a set of flash cards and asked to add Two plus Four.

I tried to explain that the Two and Four  could never be together. They were both in love with Three.

I thought everyone knew that. 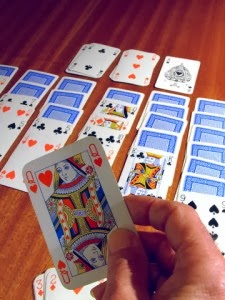 Next, he took out a deck of cards.

He shuffled, mixed the Numbers together, and laid them on our kitchen table, row by row.

Some were face-up; others were hidden, snuggling against the back of an unknown stranger.

"This game," he said, "is called solitaire - because you play it all alone."

Silly man, I thought.  A girl and a stack of Numbers is never alone.

And that's how I grew to love solitaire - hearts - gin rummy - all the card games that saw me through my childhood.


I'm happy to report that my schizophrenia abated.

By the time I started kindergarten I could count with the best of them, without regard for the emotional lives and social entanglements of the numbers I threw around.

Even so - even today - the ghost of old friends sometimes visit.

I bought my little bungalow in Como Park in 2002 - a lovely, orderly number.

I remember when I first saw the adorable little house.  I parked my funky Volkswagen at the address given - and for some reason, didn't think of the address until I saw the numbers above the front door.

There they were - my dear friends - Seven and Five.

A fine price.  A lovely price.

Not a Three in sight.

Still crazy - after all these years.