The children who come to my door on October 31st will meet a hideous old woman, wretched and hidden inside her black, hooded cape; her features smashed by a dark,  opaque stocking, her hands vanished in black socks.

Instead, she will gurgle a terrifying, muddled murmur.

To the tiny brave ones who dare to step into the eerie, green-lit porch where bats and dismembered bones abound, she will offer marvelous, full-sized chocolate bars.

The candy will bring the brave children closer.

The timid will be terrified and turn down her candy rather than step into her lair.

When I was in my fifties (yes, when I was fifty-something-years old!) the neighbors began their annual complaint about my Halloween antics. 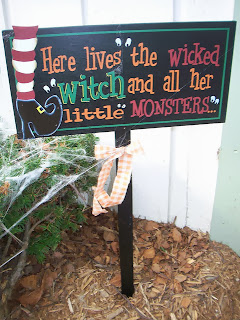 They claimed I take Halloween too far.

I don't need to be so frightening - the kids seek only sweets and a soft congratulations for the mother-made costume. They don't need the terror I impose.

Some said I have fun at the expense of children - an immature act that robs little ones of both the innocence and merriment of Halloween. They said I replace good stuff with fear.

I've heard this for over ten years, and I don't give a rat's ass.

There are only so many Halloweens in our short, sweet lives.

When that happens, the opportunity to "haunt" will be authentic and meaningful.

Until then, all we have is one night of the year - Halloween.

I intend to squeeze every possible scream out of every single child who dares knock on my door.

For those of you who choose (for bogus religious reasons) to ignore this magnificent celebration of the dead, I offer these five, simple, clear reasons why you are wrong.

to honor Halloween - irrespective of age


Reason #5 - Halloween is the only holiday when we are encouraged  (and allowed!) to cultivate and exploit an alter ego.  If we cannot let loose and enjoy the dark side of our personality (or, the light, miraculous, cheery side) - we are poorer for the lack.

Reason #4 - It's true - Halloween is for children.  And we're children as long as we grab Halloween by the gonads and wrestle it to the floor.  Celebrate and stay young!

Reason #3 - Locking the door, turning off the lights and pretending to not be home on Halloween night will provoke the neighborhood children.  Granted, they might not commit outward acts of vandalism.   Even so - who wants to be known as the "mean old man" in the corner house, who can't open his heart or door on October 31st? 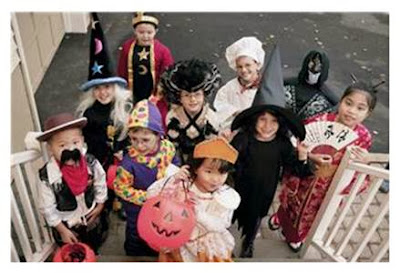 Reason #2 - Halloween is the first of a string of wonderful, fabulous, festive and outlandish holidays.

Shutting it down is a bit like turning your back on fun.

Making it a grand event will deepen your gratitude for autumn and winter - - here, in the land of sludge, crabby neighbors and people who wear too many clothes - - even in the summer.

And reason #1 - Childhood is short.  Without your good example, those little children at your door will "trick or treat" five, maybe six times in their lives.

Don't let that happen.  Show them adults know how to have fun too.  Be a witch. Be a vampire.  Be Peewee Herman, if you choose.

Be the best Halloween grownup you can be.

Be a child again.