Ghosts in the heartland 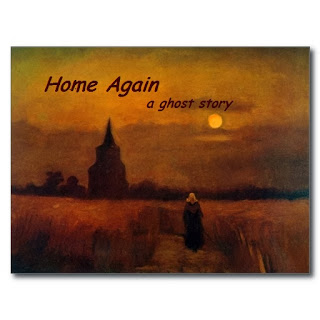 After Elsie dies, she realizes her life was peppered with unfinished business.

She returns, hoping to open the doors she closed in life.  Along the way she discovers most of life is "unfinished."  Nothing comes to a conclusion.

And no one is irreplaceable.


I was only eight-years-old

when my grandfather died.

Oscar was a cranky, difficult Swedish immigrant with little tolerance for childhood.

He never learned English; never had to.  Everyone in my family understood the language of rage.

Grandpa Oscar died on a cold afternoon in May.  Three weeks later, my cousin Cherry died of acute leukemia. She began to bleed on a Friday afternoon and was dead by Wednesday.

My cousin Cherry was eight-years-old.
And so was I.

Death was not proud in that year.

My Aunt Olga followed Cherry - and within a few short weeks, another uncle and aunt died together in an automobile accident.   For all of this loss, I was too young to attend funerals, too old to be ignorant of grief.

Theologians tell us that our first exposure to death is lasting.  The sudden shock of mortality changes a child.
Early exposure to death may result in everything from a propensity to alcoholism and drug addiction - or, as in my case -  an adulthood dedicated to parish ministry.

Elsie's death leads her people to a  new appreciation of limits and a fresh compassion for the imperfection of all things.


"HOME AGAIN - A GHOST STORY"  premieres in 2015.
Watch for opportunities
to attend a staged reading
at Theatre in the Round Players
January, 2014.