Confessions of an unrepentant tattletale 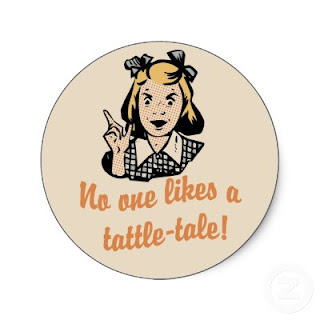 You'll get no apology from me.  If you're doing something against the law and I see it?   I'll blow the dang whistle on you.

I did it when I worked for the Minnesota Department of Corrections.

I did it when I worked for a certain women-serving nonprofit cheating its unsuspecting funders.  And I'll do it again.

Don't let me catch you stuffing a box of company paper in your briefcase as you punch out.
I'll tell the boss.

If you're one of those unfortunate parents who insists on taking your exhausted toddler to Cub Foods at four o'clock in the afternoon,  you better watch your back.

Don't you dare slap that little bink in front of me.  I'll call the frickin' county.

I'm one of those moral fruit cakes you've read about.

I am a whistleblower.

Tattletale as a rightful legacy 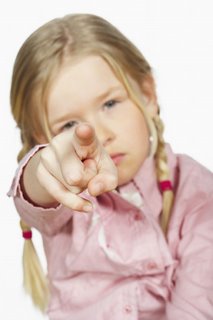 I come to this odious behavior honestly.

My mother - bless her self-righteous soul - trained me in the fine art of radical truth telling.

I was seven-years-old when she issued her first order.

"If anyone, " she said, "ever asks you to do anything I wouldn't want you to do  - you come home and tell me right away."

Never mind the lack of logical thinking in that demand.  I listened.  I obeyed.

When ten-year-old Mike Zeller asked me to go into his garage and "pull down" my panties - I told him I had to first ask my mother.

The rest is Goodrich Avenue legend.

Mike, last I heard, was doing time at Moose Lake.

The Zellers moved to California, never to be heard from again.

And I went on to become a professional writer.  A notable tattletale.

No one escapes my righteous indignation.

When my children were young,  I wrote a column for the Star Tribune.

For the first several years, my girls were a common topic.

Piano recitals.  Political slights by the public schools.  The charming ways in which their little worlds reflected the larger issues of society.  That's what I wrote about.

Then, one day - my seven year old came home from school, fierce in her rage against me.

"I didn't know you wrote stuff everyone reads, " she said.

I reminded her that the circulation of my newspaper was several million readers.

I assured her that was not going to happen.

"At least," she pleaded,  "stop writing about me."

And so - a truce was forged.  And I stopped writing about my daughter Grace.

That is - until writing this blog - - where, I guess, I blew the whistle on her.

Which only proves - I'm not to be trusted.

Don't let my sweet smile, my blue eyes, my little-old-lady affect confuse you.

You bring bibles into my public school?  I'll call the American Civil Liberties Union.  You stop one of my friends from speaking out a school board meeting?  I'll call the police.

I do it for our collective good.  I do it to make you a better person. I do it because I can't do anything else.

The logic of my whistle-blowing mentality might not resonate with your timid approach to citizenship.