The hard sell on marriage 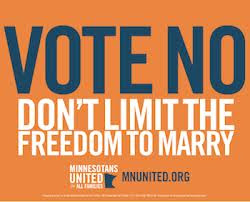 Off I went last night - excited to phone "undecided" voters and persuade them to vote NO on the marriage amendment.

Unless you've been under a rock for the past six months, you know what I'm talking about.

This past year, the Minnesota State Legislature passed the following amendment to the state Constitution.  The voters, however, are the ones who must pull the trigger to give it power.


"Shall the Minnesota Constitution be amended to provide that only a union of one man and one woman shall be valid or recognized as a marriage in Minnesota?"

Not because I think gays and lesbians should marry if they choose - although I do.

Not because I believe in polygamy or bestiality or whatever other weirdness the Religious Right promises will ensue - although I don't.

I say "no" because I don't want my constitution messing with this part of the social contract between men and women.  I like things the way they are - flexible, free, and  open to the nuance of history.

I learned last night, however, that my reasons for supporting the defeat of this amendment are impotent.

The campaign has its own reasons.  And they have little to do with freedom, societal contracts or the legitimate construction of constitutional content.


Messing with my head


Of course, the ten of us who showed up to phone filled the little office, unaware.

We were leftie Baby Boomers - all.  Balding, greying, plumping, daring-to-drive-at-night Social Security recipients;  traveling with satchels of organic produce and water, bottled to our own containers - to help us make it through the night.

We were promised a "training," and we got it, all right.

Our trainers were two overly-pierced and hipster attired youngsters.  The girl was tall, thin, mini-skirted and grim.  She wore black tights (of course), black boots, and gloves with the fingers torn free to expose black fingernail polish, nibbled to the raw.

They were the first to break the bad news to us.

We needed, they said, to put away our preconceived reasons for opposing the amendment.  Hearts and minds are not moved, they said, by concern for civil liberties - individual freedom - the protection of the constitution.


Using a tactic that works with the undecided


Instead of talking about "rights" and "laws," we needed to talk about our personal relationship with marriage.

"Think of your own relationships," the young male hipster instructed.  "Think of all the good things it brings you. Think how sad it would be if only heterosexual couples could experience what you've experienced."


A gray, bearded old guy in the back of the room coughed and raised his hand.

"What about your own parents?"

"Assholes," the man coughed again, and we all laughed.

Sitting beside him, a straight-backed, elegant bottle-brunette in a Chico's silk top and Ecco shoes shook her head and waved at the girl hipster.

"You married?" she asked.

The young girl shook her head.  No - she wasn't married.

"Well, I don't recommend it." the old woman said.  "I've been married three times.  How am I supposed to get on the phone and tell anyone marriage is a good thing?"

"Who's idea is all this?" the man in the back barked.

"None of us is here to 'recommend marriage,'" said a gentleman in tweed trousers, a corduroy jacket with leather patches on the elbows.  "We're here to support the Constitution."

The hipsters glanced at each other; a furtive, calculating glance.

Three people in the front row stood - gathered their bottles and bananas and exited.

No one called them back.

"Here's the script," scrambled the anxious girl hipster, as she hustled to pass-out a paper covering the evening's talking points.

"You can study it," she said.  "It's only a suggestion.  You're free, you know.  You can talk about the constitution - whatever -  if you want."

The poor guy.  We could see it.  He was so disappointed in us.

I felt the mood in the room shift.

Disapproval from young people is hard for any Boomer to accommodate.

"It's okay," the brunette leaned forward in her chair."We can do this, honey.  We're cranky, that's all.  Pay no mind to us."

"We'll follow your little script" the brunette confirmed. "No biggie."

So it came to pass that last night, a room full of cynical elders,  phoned several hundred strangers and lied to them - bold faced - about their affection for the proverbial tie-that-binds.

I heard them as they dialed and chatted.

Marriage, they said, is a beautiful thing.

Do you know someone gay or lesbian?  Do you think that one day they might want to be as happy in their relationship as you are in yours?

Why deny them the elegant bliss of matrimonial heaven?

Why, indeed, I thought.

Everyone deserves the right to experience the raw disappointment, gut wrenching disillusionment and hard, cold misery that only married love can bring.