October 12, 2012
Unless you're intellectually challenged, educationally stunted, emotionally vague or dispositionally stupid, you understand the positive message behind the negative word. 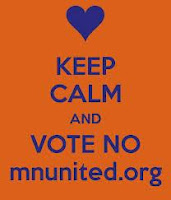 Peppered around Minnesota, orange and blue signs encourage you to vote "no" on two constitutional initiatives.

One might think "YES" is a positive thing.  Think again.  Sometimes (in this case!) your YES shuts down your freedoms - and mine.

Two initiatives - one to limit the freedom to "marry" to one man and one woman.

The other - to insist that everyone who casts a ballot in Minnesota carry photo identification.

I'm not a lesbian (although, if you GOOGLE my name, you'll see how many times I am labeled such!) and I'm carry a photo I.D.  So - technically, I have no dog in this fight.

I am, however, free.  And I hope to stay free as long as possible.


(Granted - one day my adorable children might choose to confine me to a facility where I'm strapped into a wheel chair and fed three meals of pureed beets and chicken vomit. Until then, I'm hanging tough to the little freedoms I own!)

Freedom's just another word for nothin' left to lose.

A big part of my freedom (and yours!) is the freedom to engage in normal, acceptable loving relationships - where the world joins you - and calls you "good."  ( I lose nothing.  You lose nothing.)

Another part of my freedom (and the freedom we all share in this great land!) is the ease, comfort and accessibility of our most treasured franchise - the vote.  (I lose nothing.  You lose nothing.  Get it?)

Until recently, I did not know that the Department of Motor Vehicles issues photo identification to all citizens - for a small fee.  And if I did not know this simple fact, I'm certain - dead certain - that a majority of underprivileged, undereducated, under-represented Minnesotans do not know it either.

You may not like the fact that all Minnesotans are welcomed at the voting booth.   Stupid people - poor people - handicapped people - illiterates - incompetents - the blind - the deaf - the amputee;  the many miscreants you don't like and don't want your daughter dating.

But hey, Bunky.  This is American.  Land of the free - home of the imperfect.

And last time I checked, when all Minnesotans vote - we all win.

Even when we vote in the negative.