Gays, lesbians, and the question that pushes history

I don't know if anyone should ever be "allowed" to marry. My feeling about marriage is as skewed as you might expect from a twice married, retired cynic.

But that's the point, isn't it? Why should my feelings about who marries whom mean anything to anyone? 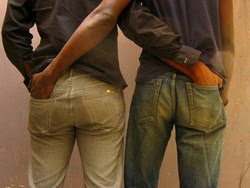 Although I have no dog in this fight, I was thrilled with the recent decision in New York. I guess I'm in good company. Hollywood elites are twittering their delight over the news. Apparently Steve Martin was so enthused, he proposed to Alec Baldwin.

My inability to get up a strong opinion on who marries whom doesn't seem to stop my state legislators from spending their time fantasizing over the sex lives of lesbians-in-love and gay men.

Here in Minnesota, we're gearing up for an amendment to our state constitution to make certain the marriage of homosexual or lesbian couples never happens on our sacred soil.

Asking citizens to decide this issue is a little like asking the Carpet Baggers of 1870 if blacks should vote, the 1945 Klan if Jews should marry Baptists, the 1955 members of Yale's Skull and Bones if the university should admit women.

Our Republican legislators articulate a strange justification for the vote, which will be on our November 2012 ballot.

"This is not about hatred, it is not about discrimination or intolerance," Republican Representative Steve Gottwalt said of the amendment. "I have faith we as Minnesotans can have a reasonable dialogue on this issue characterized by respect and decency and allow the people of Minnesota to decide."

That's where I'm tossed. I'm never too comfortable letting the "people" decide on issues that move us forward.

Why? Because most of us like things as they are.

Susan B. Anthony spent her entire adult life fighting for women's suffrage. She died before women were granted the vote in 1920; a decision seventy-three years in the making.

I sleep well at night, knowing I live in a republic, where elected officials make decisions on my behalf. If I lived in a democracy where the masses ruled, I fear my sex would still be the legal property of fathers and husbands; my female children would not have the right to inherit or work. No - - "the people" are not usually the best force for history's epiphany.

I hate to see these important, critical issues handed over to people like me - who care when called upon, but don't deserve this kind of power over the happiness of others.

When we start thinking that the world is becoming a more humane, sane and open place, remember this: Twenty-nine states have adopted constitutional amendments restricting marriage as between a man and a woman, and 12 other states have passed laws to that effect, according to the Human Rights Campaign.

Here in the heartland, the battle lines are forming.

Hold onto your hat. It going to be a long, bumpy ride.