May 21, 2011
On Friday, Bradlee Dean, a bigoted, anti-semetic self-proclaimed evangelist, was invited by Rep. Ernie Leidiger, a Republican from Mayer, Minn., to start Friday morning's session with a prayer at the Minnesota House. 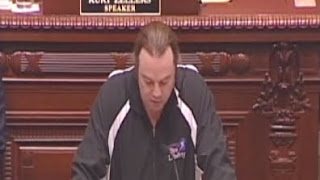 By now, everyone in Minnesota knows what happened next. Dean's inflammatory, bigoted and outlandish hate speech galvanized the room. For the first time during the contentious and bipartisan divided session, the Democrats and Republicans agreed; Dean is an abomination.

Some of us in the heartland have known this for a decade. Invited into our public schools to teach our children, Bradlee Dean's "ministry" has been scooping up our tax dollars for years, "educating" our children in everything from "the constitution" to "abstinence" and "drug abuse prevention;" using his connections to the Republican party to open doors and state coffers.

Now that Dean's antics are in the sunshine, the Republican law makers who made this man's career possible are running for cover.

Ironically, Dean's ministry is called "You Can Run - But you Cannot Hide."

And they cannot hide. The Minnesota Republican's relationship with Dean is now available for public scrutiny.

(Click here to listen to Dean's defense of "calling for the execution of homosexuals.")

IN 2007, former Secretary of State and current Representative Mary Kiffmeyer served as master of cermonies for an event honoring Bradlee Dean’s ministry

“They’re not ashamed of the Gospel of Christ, and their country, to preach it, and using that exercise of their freedom." In his "sermon" at the same event, Dean said, "The Pope is “a devil disguised as a minister of righteousness," and compared the teaching of evolution to the ideology of Hitler.

IN 2006, Michele Bachmann led a prayer for Bradlee Dean’s anti-gay ministry saying, “Lord, I thank you for what you have done with this ministry”

TIM PAWLENTY has also been a guest on Bradlee Dean’s radio show, along with many other local Republicans and conservatives. 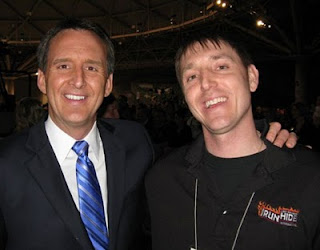 By the way, in his apology for extending the invitation to this ignorant, hateful man, Leidiger says someone from Dean's ministry requested the invitation and he respeonded. He says he only knew of Dean's past work educating students on constitutional issues and not his controversial past remarks.

Is anyone else out there terrified by this? Dean - in the public schools - teaching "consitutional issues" - and, by reputation, attracting an invitation to address the entire House of Representatives; makes my blood run cold.


Next time you hear a Republican claim he or she never knew Bradlee Dean as a bigot, hate monter or antisemitic - - ask to see the rock under which they live.