Bradlee Dean is back! And this time he's offending his funders!

May 20, 2011
On Friday morning, Bradlee Dean, passing himself off as a member of the professional clergy - led the prayer to open the Minnesota State Legislature with these words:

He brought down the House. Literally. As the religious Republicans rushed to apologize and distance themselves from Dean - I remembered when I first heard of him, and his band - "Junkyard Dog."

It was long ago and far away - in Northfield, Minnesota, in fact. In those days I believed in the good intentions of drug-abuse prevention programs in the public schools. No longer, thanks to Bradlee Dean. 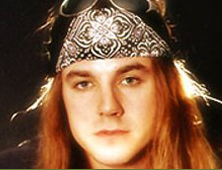 It all happened in April 2001, when the Northfield schools secured $1,500 from the Minnesota Department of Children, Families and Learning for their annual drug-abuse prevention assembly.

With the blessings of the principal, superintendent and school board, Kevin Merkle, Northfield High School activities director, hired a Christian evangelist to do the job.

Don't bother to read that paragraph again. You got it right the first time. Public dollars. Public school. Christian evangelist.

The evangelist is Bradlee Dean, a former cocaine addict who took Christ as his savior, picked up an electric guitar, and has been reaping the benefits from his born-again nonprofit tax status ever since. During the 2001 school year alone, Dean appeared in 28 schools, sucking up money intended for drug-abuse prevention programs and abstinence-only sex education.

Faribault schools paid him $3,000 for two assemblies; Centennial in Minneapolis gave him $5,000.

Your tax dollars at work.

Every year, the district dances closer to the edge of social engineering and fascism.

In 2001, Northfield High School went all the way during two mandatory assemblies at which Bradlee Dean's young, blond wife sang her rock-version of "Jesus Loves Me" to an auditorium filled with captive high school children.

Then, after blasting our children with loud, ear-crippling guitar garbage, Dean accused Northfield youth of loving pornographic movies, booze and guns. He charged them with drug abuse, sexual promiscuity and something called "impure thoughts."

His wife instructed the girls on appropriate ways to be "chaste" for their husbands to be and said disparaging things about homosexuality, lesbianism and single-parent-families.

The 56-page booklet told the sad, sordid tale of Dean's drug-filled, promiscuous youth and how he was saved from sin by his personal relationship with You Know Who.

All of this was packaged as preventative education to the children of the farm families of Rice County; the sons and daughters of St. Olaf and Carleton, Sheldahl and Malt-O-Meal.

I called Merkle to find out his version of what happened.

When I asked him if he thought the content was inappropriate for public schools, he barked, "You just don't want us to do anything Christian in the public schools, that's your problem."

Merkle of course, is correct. And I am not alone in my allegiance to the Constitution. I hang out with folks who would take a bullet in the forehead over this issue. They believe, as I do, that schools have no business in the business of religion.

The mission of our public school system is to teach responsible citizenship. Rather than attempting to convert children to faith, public schools should be about converting students to be intellectually curious, critical thinkers who challenge societal assumptions.

Teaching the love of God is the work of religious professionals and people of faith. Discipleship is a discipline learned in the home, church, synagogue and temple. Not the public schools.

For some reason, these straightforward ideas were too complex at the time for the timid souls in the Northfield school district.

But not for the rest of us.

After the assembly, I joined more than 60 citizens who signed a petition, calling for the district to take action. We wanted our school board to investigate possible malfeasance by an administration that turned the other cheek while Dean humiliated our children.

In response to the petition, the superintendent placed Kevin Merkle, the school official who arranged for the assemblies, on the committee to investigate.

Like many small towns, the Northfield school board used to be a cozy club of decent, law-abiding hand-holders. The Northfield board consisted of sunburned Norwegians, one or two fathers of high-school jocks and several silent, baffled women.

Ray Cox was one of them. He supported Bradlee Dean so vehemently he actually threatened legal action against those who spoke against him.

Cox went on to become a state senator.

The rest of the school board wanted to believe in the good intentions of our administration.

The last thing they wanted was for anyone to get in trouble over the Constitution.

Bradlee Dean knows this all too well. He told me so when I phoned him after the event in Northfield.

"The time is right for my kind of witness," he said. "The "abstinence only' money is there, and young people are hungry for the truth. And principals love me. Especially in the small towns. That's where people are most open to the word of God."

Maybe so. For many Minnesotans in the heartland, the Lord is our shepherd. That doesn't mean they want our schools to become spiritual troughs for the sheep.

And once in a while, a school district might forget: Minnesotans don't do well with people who don't respect our laws. In Northfield, for example - Don't try to rob the bank or spit on the Constitution.

Those people can get downright nasty.

Before they were finished with the Bradlee Dean affair, Kevin Merkle - the activities director - was given his walking papers. The superintendent of schools politely resigned for a position in the Twin Cities.

But that has NOT stopped Bradlee Dean from his insanity.

Next time - Dean's homophobia, antisemitic rhetoric is welcomed by Michelle Bachmann's campaign for the Presidency.